The Memorial Park was created as a tribute to honor the memory of the officers who died in the line of duty.  Since 1922 when the Illinois State Police was formed, seventy-two officers have given their lives.

The Groundbreaking Ceremony for the Illinois State Police Memorial Park was held on November 12, 2015.

Integrity, Service, Pride comprises the motto of the Illinois State Police.  These words are the core values of the men and women serving the citizens of Illinois.  The Memorial Park focuses on these three core values as they are expressed both symbolically and through inscriptions on the various features a visitor will see at the park. 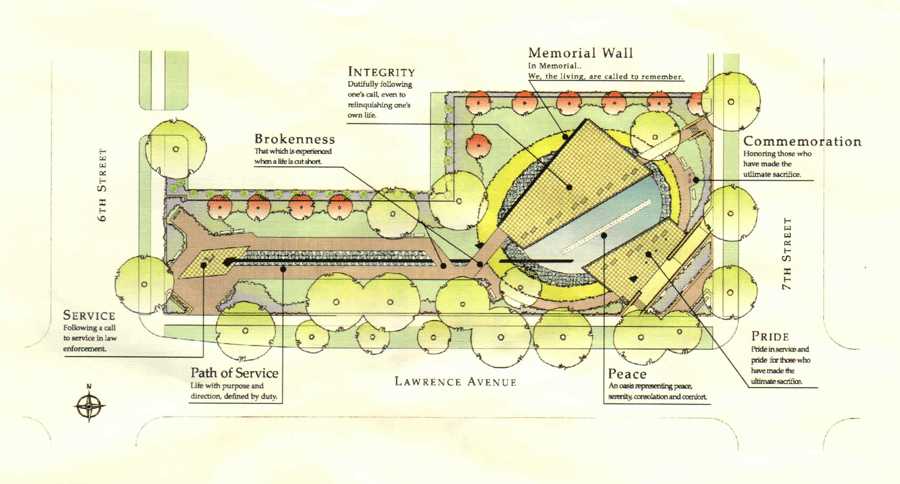 Within the park is a sequence of experiences which will instill the visitor with a sense of the dedication of the fallen officers of the Illinois State Police, the sacrifice made by them and their families, and the gratitude that is their due.  The sequence begins with the commencement of an officer’s Service – following a call to serve in law enforcement.  One then follows the “path of service” of an officer – a life with purpose and direction, defined by duty.

The sequence continues with the visitor passing through a transitional area which speaks to the brokenness experienced when an officer’s life is cut short and culminates at a sacred place which pays homage to the Integrity of the officers who have made the ultimate sacrifice.  As part of this culmination, each officer is memorialized by name and hometown.  One then follows along a return sequence which includes a special place set aside to commemorate the virtue of Pride as part of the character of an officer.

Through bronze sculptures and granite memorials, landscaping and a water feature, the visitor will experience a sense of the instilled pride of the men and women who serve the Illinois State Police and the gratitude, honor, and respect they afford their fallen comrades, as well as their comrades’ families. 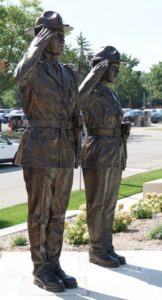 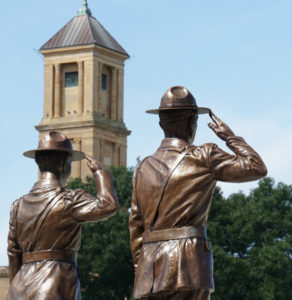 A place of consolation and comfort

The park provides for public gatherings to remember and honor the fallen, as well as places for quiet introspection, meditation, or prayer.   The park is intended as a place of consolation and comfort for those who have lost a family member or friend.